The 2 reasons gay marriage should be illegal This post is for Adults only. 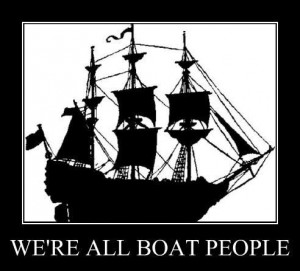 I was with a female coworker, quite some years ago, when a news story came on about the latest drama involving refugees arriving on a sinking boat. I’m not sure if I asked her opinion, or just offered my own words of sympathy to these people, but she said, to the best of memory, “They should fly them back to where ever they came from … and drop them out of the plane half way back … then drop a bomb on them.” There was no sense that she was half joking or exaggerating to make a point. Nothing but spite and venom. It was actually quite chilling. More so because a week previously she had told me a story about a bird that had nested in a tree limb just outside her kitchen window. She had the pleasure of its company for a few months whilst it had gathered the materials, built a home and laid its eggs. They had just recently hatched, and the spring morning was filled with the chirping of the new birds. Unfortunately this had attracted a large magpie, that had driven the mother bird from it’s nest and was killing the chicks for food. My coworker had called out to her husband, her voice strained by the tears running down her face, and run outside with a broom to save the baby birds, these poor defenseless animals from being eaten.

How is it eyes filled with tears for the death of baby birds can be cold with hatred for some anonymous human beings? Is it because the people were anonymous, but my friend got to know this bird family? I don’t believe that is the case, because I’m sure I pulled the heart strings of a few readers of this column with the story of the birds whilst they felt little, or at least not as much, when they read the comments suggesting how we should deal with boat people. Could it be because the birds are babies? Do we honestly think that babies aren’t involved in these dramas? I think the difference in the two scenarios is that the birds had done nothing to harm my friend, but she was under the impression that the refugees arriving by boat are trying to steal something from her or are guilty of some crime. This impression is not helped by the medias use of the inflammatory word “illegals”.

The reality of the situation is that no-one seeking asylum in Australia has broken any law, no matter how they arrive and over 90% of the boat refugees that arrive every year are granted asylum. This means almost all the people that arrive by boat have a legitimate reason for fleeing their country of origin and looking for a new start here. This is really patently obvious to anyone who thinks about it, because no-one leaves behind every one and everything they know to start over somewhere else on a whim. A little over 16 000 boat refugees tried to enter the country last year. What’s not readily mentioned by the government is that 200 000 immigrants entered by plane in 2012, so the boat arrivals are about 7% of the people entering this country. The new deals made this week to ship, house, process and finally relocate asylum seekers to other small island nations in the pacific mean over a billion dollars has been spent to deal with a small fraction of the people trying to enter our country or well over $60 000 per person. Why the stigma attached to people arriving to the shores of this great country by boat?

Immigration minister Tony Burke said on Thursday, “The promise of living and working in Australia, which is sold by people smugglers before they push people onto the high seas, is no longer a product available.” He seems to be under the impression that these refugees are fully informed participants when they make a deal with these people smugglers AND that people smugglers would never lie to the people they are trying to smuggle. To believe that victims of a scam should share some responsibility for it, and that criminals would not lie to make money seems particularly obtuse. In the first article I linked to, the grieving mother explains that she was charged $7200 each for her and her brother to get passage to Australia. At this price, the 16 261 people that arrived by boat in 2012 could potentially earn over 117 million dollars for the people smugglers. With this kind of money involved does Minister Burke really think this plan is going to make the people smugglers fold up their tents and slink away? It is akin to saying “Assaults will be less frequent because we have changed the hospital where the victims are sent.”

So what’s the solution? How can we put the people smugglers out of business? How can we protect the lives of innocent refugees trying to start a new life and ensure that no more people will drown? Well the answer seems pretty obvious to me. Free flights for refugees. Make it known that anyone that makes it to Indonesia, looking for asylum in Australia will be flown in at zero cost. It would cost us 8 million dollars to fly in last years refugees if we paid commercials rates, a ridiculously small amount of money. Let’s process them here along with the 200 000 others that fly in and get rid of the boat person stigma for good. We’ll also save ourselves a boat load of cash.