The atheist who exists Divine Shield: 5 Ways Religion Protects Itself From Legitimate Criticism

This is part of The Atheist Who Exists series.

Chapter 1 of Andy Bannisters “The Atheist Who Didn’t Exist“, like any decent book, summarises the argument it is trying to make. In this case, it is the terrible consequences of the bad arguments atheists make, and it is summed up by the “true” story of Mr Bannister hearing of the atheist bus. In truth it was a regular bus, but it sported an ad sponsored by The British Humanist Association, that read “There’s Probably No God. Now Stop Worrying and Enjoy Your Life.” He calls this ad, “A perfect example of a really bad argument.” and goes on to examine the minutiae of the wording and why it is a terrible argument. I’ll talk about that in a second but first,

My rebuttal in a nutshell

Andy Bannister: “There’s probably no God. Now stop worrying and enjoy your life.” is a terrible argument for atheism.

Me: It is no more an argument for atheism than “Jesus Saves” is an argument for Christianity. Rather these are statements of belief. The reasons for these beliefs, the arguments that can be made, are a separate thing entirely. 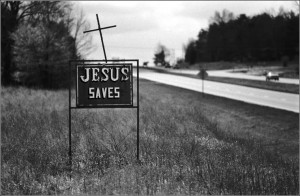 Bumper stickers, Facebook memes, bus advertisements and 140 character tweets are, by necessity, short and punchy. In almost no cases are they arguments, but rather a “sound bite” to make you think. If you want the larger argument you should read a book. But leaving aside the category error, lets examine the specific problems Mr Bannister has with the bus ad.

Firstly he comments, “Well, one might begin by noting the preachy, condescending, and hectoring tone.” Maybe it’s me, but I don’t find it to have that tone at all. I find the tone of it to be positive and uplifting. Could it be my frame of reference is quite different to his? He continues, “But there’s a deeper problem, too. For atheists like Richard Dawkins, God does not exist, right? That, after all, is what the very term ‘a-theist’ means.” (It doesn’t, and we will address that in a future chapter.) He then rattles off a list of other things that don’t exist (fairies, unicorns, etc) and asks, “… what’s the connection between the non-existence of something and any effect, emotional or otherwise?” This seems to me to be a lack of imagination on his part. When I first read this I immediately thought of three things that don’t exist that have an emotional effect on people.

And that was without giving it any real thought at all. Feel free to post a comment with others that you think of. Now you can say that point 2 is of something that did exist and doesn’t anymore (or exists elsewhere) and point 1 might be suspect because of the age of the person involved, but point 3 seems to be a pretty close analogy to God. Mr Bannister might take exception to the negative connotations, but it seems to me that the authors of the bus ad might find the comparison apt.

Mr Bannister then introduces the main device he uses throughout the book. That being taking an argument or statement made by atheists and taking it to a ridiculous extreme to show a supposed flaw. This is the definition of a Straw Man argument.

“There’s Probably No Loch Ness Monster. So Stop Worrying and Enjoy Your Life.”

He makes the valid claim that this is a non sensical statement and thus uses that to refute the original. However the reason this statement is nonsensical, when read on a bus driving around London, is that no-one believes the Loch Ness Monster is an entity whose actions will have far reaching consequences on humanity, now and into the future. The Loch Ness Monster is different in that way to the Christian God, or the Martian invaders of War of the Worlds.

“There’s probably No Martian Invaders. So Stop Worrying and Enjoy Your Life.“

is certainly something that could have been reasonably said to those who had mistaken a radio play for a live News broadcast.

He then focuses on the last 3 words of the sentence, and after an alphabetised list of 26 other human emotions asks “… why does the atheist bus advertisement zero in on ‘enjoyment’?” He makes no suggestions as to what would be a better way to end the ad. Looking at the emotions he listed, perhaps he wanted ‘compassion’ mentioned. Or ‘queasiness’. Or ‘yearning’. I have to ask, what does he think this 11 word ad is trying to accomplish? And does he think “Jesus Saves” is a bad ad for Christianity because it doesn’t mention anything about the fellowship of the church, or the power of prayer, or the path that God has laid out for his people? Mr Bannister asks, “But what if you’re not happy? What if you’re like my earlier example – jobless, friendless, penniless, and hopeless?” He wonders were the the sponsors get the nerve to tell everyone to ‘Enjoy themselves’ when obviously some people are having a hard time of it? In the same way I would suggest that telling someone who has just lost a child, “Jesus Saves” is in incredibly poor taste. How dare anyone put up a message like that when there are obviously people who it will offend and hurt! Ads should be all things for all people in all situations! **end sarcasm**

The final part of the chapter focuses on a particular tweet of Richard Dawkins.

“Stalin, Hitler and Saddam Hussein were evil, murdering dictators. All had moustaches. Therefore moustaches are evil.“

Richard Dawkins was making the point, that even if these dictators were atheist, it was not their atheism that caused them to be dictators, any more than it was their moustaches. There is no atheist hand book that lays out the rules of how to wipe out the religious in the way that Hitler exterminated Jews, Stalin massacred Christians and Hussein killed Kurds. Mr Bannister tries to make the claim that Stalin’s atheism was central to his actions. He quotes the slogan of the League of Militant Atheists, which Stalin “actively encouraged the foundation of” (whatever that means) – ‘The Struggle Against Religion is a Struggle for Socialism.’ It seems to me that this quote shows that driving force behind Stalin’s actions was his ‘Socialism’. In fact Mr Bannister argued against atheism being the cause of Stalins atrocities earlier in his book when he said, “… what’s the connection between the non-existence of something and any effect, emotional or otherwise?” Which does he believe? That atheism can’t effect people or that it can?

The reasons behind Stalin’s atrocities are a lot more complicated than just his politics, of course. A lot of ‘stars have to align’ for a man to be responsible for the deaths of millions. There is at least one major step to go from “I don’t believe in god.” to “I will destroy churches and kill the religious.” And this is the point that Richard Dawkins was making with his tweet. Atheism, a disbelief in god, cannot produce this result. It is as ludicrous as suggesting that Stalin’s facial hair was responsible. I also believe that the Andy Bannister quote shows that he understands that the non-belief of something cannot be a motivator. He touches on it in later chapters, and we will discuss it more then. For the moment he is stuck trying to argue that atheism is empty and cannot be the basis for any effect on a person, whilst simultaneously arguing it is responsible for causing Stalin to be the horrendous dictator he was. And this in a chapter where he is trying to caution us to beware of bad arguments, and the terrible consequences they have.

One Response to The Lochness Monsters Moustache