A letter to my wife … on her wedding day. The atheist who exists

Just give each citizen a million bucks! 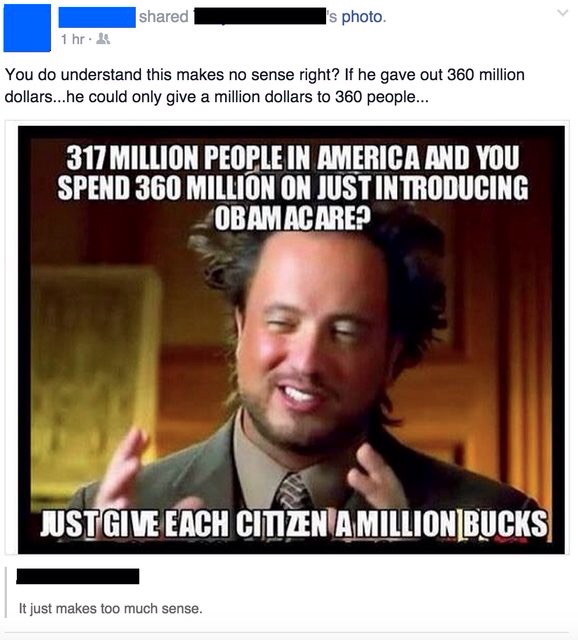 This was bought to my attention on Facebook, and whilst the sincerity of the Meme makes it amusing, the real comedy is to be had in following the conversation between someone who believes that statement makes a valid point, and people trying to explain the basic math mistake they have made. The conversation can be read at This Link

It’s not “Who’s on first?” by any stretch, but the straight man in the exchange is the perfect foil for our hero who has the “correct answer”, confirmed by the calculator on his smart phone and the awesome respository of all human knowledge and experience, that we call Google. Not to mention his father, Vice President of computer programming. (Alarming indeed.)

We all make mistakes

Now I’m not making fun of the anonymous person who made the mathematical error. We are all human and make these kind of mistakes everyday. I remember Russell Crowe making the exact same mistake on Jay Leno whilst discussing the U.S. Bank bail outs in 2008. It’s certainly possible that one of you reading this very post was unsure who was correct when you started (but hopefully it was crystal clear by the time you reached the end). But I’m quite confident that everyone reading this exchange knew the problems were entirely the result of human error and not anything to do with the uncertainty that multiplication and division were sound principles that could be relied upon. I’m sure no-one, at any point, lost their faith in the principles of mathematics. (If anyone did, please post a comment. :-)) This meme made think of Young Earth Creationists and Radiometric dating.

Young Earth Creationists believe the first chapters of Genesis are a literal retelling of a God’s creation of the universe. Everything was created in 6 earth days, and using the genealogy laid out in the Bible they have calculated the Earth to be less than 10 000 thousand years old. As such they must attempt to refute (or else ignore) any evidence to the contrary. Evidence like the constant rate of decay that can be measured in certain unstable isotopes, which can be used to determine the age of rocks on this planet, and by extension, set a minimum age for the Earth, and therefore the Universe.

And so Y.E.C. proponents have basically two options to discredit a process. They will give examples of an incorrect dating of a sample of known age or they will give examples of two contradictory dates being calculated for the one sample. I’m not going to get into two much detail about how radiometric dating works in this post, but the idea that a number of erroneous responses can discredit a scientific method is the same as discrediting math because a high school class didn’t all get the same answer to a problem. Or to lose faith in baking after making your favourite cake and having it turn out completely different to usual. Mistakes happen and there are a lot of variables in Chemistry. The following link has a table of results showing the radiometric results of dating more than 50 samples from meteorites, using a number of different methods. These 50+ results show ages from 4.21 to 4.59 billion years. If radiometric dating was an unreliable process you would not expect the results of over 50 tests, using different methods, and testing different meteorites, to fall within such a narrow band. http://www.talkorigins.org/faqs/faq-age-of-earth.html